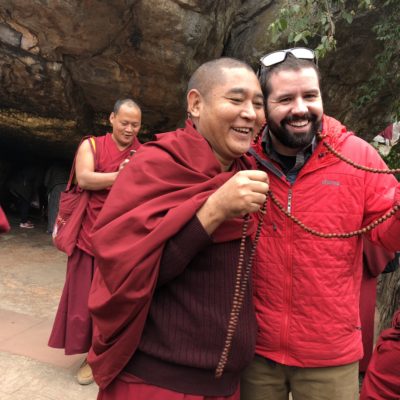 Geshe Chamba Tongyut was born in Ladakh, at the age of 11, he took novice ordination vows(Getsul) from Kybje Ling Rinpoche, one of the great tutors of His Holiness the Dalai Lama. In 1981 he joined Drepung Gomang monastery to pursue Buddhist Philosophy. In 2003, he has conferred a title of Geshe ‘Lharampa’ Degree which is equivalent to Ph.D., the highest spiritual degree in Gelugpa tradition of Tibetan Buddhist. He joined Gyuto Tantric college in Dharamsala at the end of the year 2003, he studied tantric and served as Vajra master from 2008 to 2009. He was also appointed as the discipline master (Gegu) of Drepung Gomang monastery.

Since 1992, Geshe La traveled around the world to preach, to spread the word of wisdom, love, compassion and universal responsibility. Geshe La has led the 2017 and 2018 retreat tour organized by a Soulful tour in Dharamsala and Bodhgaya. His presence has led such a positive feedback from the participants and led a huge difference in making the soulful tour life-changing moments for the participants.   Fortunately, this time also Geshe Chamba la will leading for upcoming retreat tour in Dharamsala and Bodhgaya.